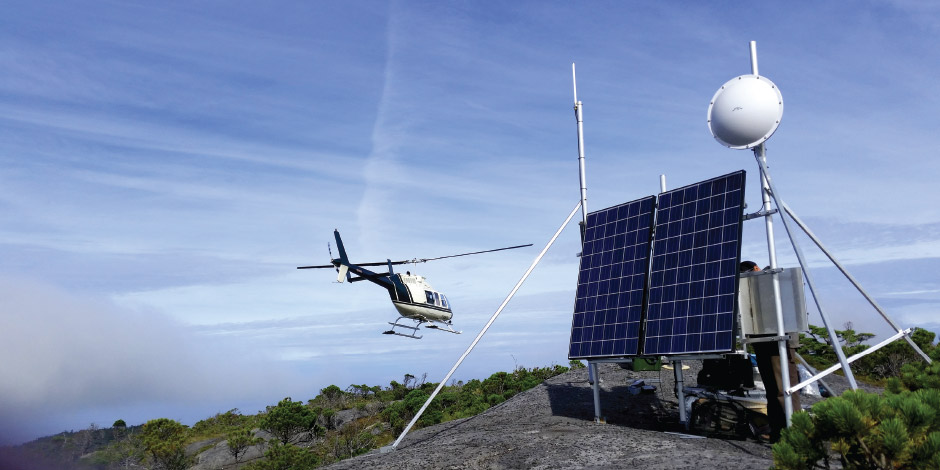 “Colby is a Swiss army knife. He pretty much does it all. James is our IT guy”, explains Jason (‘action’) Jackson. Collectively the three are the engine behind Hakai Energy Solutions (HES), a private Cumberland-based company that is quietly powering a conservation and sustainability revolution on the BC coast.

Jason was born into a family of electricians. As with many “blue collar” families, there was always pressure to go to university instead of the trades. The closest he ever actually got to a university, however, was wiring the residences at UNBC. “I was basically all set up with my university entrance requirements, but when it was time to write my SATs, I just didn’t show up”. Instead, it was the Vancouver Island logging industry that taught him what he needed to know. Finding himself a resident of Cumberland by “accident”, Jason started working for the largest electrical contractor in Campbell River providing electrical power to mills and remote logging camps alike. It was here that he picked up the quintessential “can do” attitude of the north island forest industry. “Despite the remote and rugged terrain and being totally off the grid, those guys just make it happen”, he explains.

This is exactly the attitude that Eric Peterson was looking for when he encountered Jason at the Good Hope Cannery in Rivers Inlet. Eric and his wife Christina don’t understand words like “can’t” or “impossible”. They are the benefactors behind the Quadra Island-based Tula Foundation, a private Canadian foundation that has been tirelessly making the world a better place through investments in healthcare and environmental conservation projects.

In 2009 Eric and Christina purchased a failing sport-fishing lodge on Calvert Island in the heart of the Great Bear Rainforest. Now known as the Hakai Beach Institute or simply as ‘Hakai’, they swiftly and systematically converted the lodge to one of the top ecosystem science research stations on earth. On a practical level, this is no simple feat. The research station is located on an offshore island in one of the most isolated locations imaginable on the exposed wind, wave and rain-battered outer coast of BC. It has a maximum capacity of 200 researchers, students and staff all of whom must be transported to and from the site, fed three times a day, have access to showers, wireless internet and a bed. Add sewage and water treatment, a fleet of research vessels, dry and wet laboratories, classrooms, beautiful landscaping and an organic garden. Impressive.

As the research institute was developing, Eric and Jason built HES as a company with Hakai as its first client. Jason and his team quickly put Hakai on the map as being one of the only completely solar-powered off-grid developments of its size anywhere. Coupled with mind numbing satellite-based internet technology, the entire power system can be monitored and controlled online from anywhere in the world.

Hakai is a gathering place. Some of the best intellects in BC from diverse academic fields regularly spend time here: biochemists, ecologists, marine biologist, archaeologists, zoologists, and environmental lawyers. People with more letters behind their names than the ones in their actual names. This of course includes elders and cultural experts from the Heiltsuk and Wuikinuxv First Nations in whose traditional territories Hakai operates. They bring over 13 000 years of accumulated traditional knowledge to the table. It is fertile ground for big ideas.

In the world of natural resource science, long-term data is like gold. Too often research studies are limited by three or five year project horizons with data collected in infrequent and sometimes irregular intervals. Little snapshots in time of the biological world flicker before our eyes like a TV commercial on a 1960’s Zenith television with a loose wire and a bad antenna. What if we could study nature live and in high-def, on a station that runs continuous programs? Environmental data of this quality has never before been available to scientists. That is until Jason, Colby and James met scientists like Suzanne Tank and Bill Floyd.
Suzanne and Bill along with 20 other scientists are studying the influence of watersheds on Calvert and Hecate Islands on the marine environment of the adjacent Kwakshua Channel. It is one of dozens of ongoing research projects based out of Hakai. In their words, “we seek to understand and model the flux of terrestrial materials from land to sea – the origins, pathways, processes and food web consequences–in the context of long-term environmental change”. In most cases, this kind of research would involve setting up instruments in a watershed to measure things like rainfall, streamflow, and dissolved organic carbon. A series of instruments would be deployed at several locations in multiple watersheds, each connected to a data logger. Each data logger would then have to be manually retrieved at regular intervals (huge human effort and expense), data downloaded, batteries replaced and then re-connected. Sort of like setting up a dozen battery powered camcorders to record your flickering TV shows on 12 TV’s each set to a different channel while you are on holidays so you can watch the shows later. Not awesome.

But what if you could totally wire your seven or so watersheds? What if you could provide a stable, reliable and continuous power source for your all of your dozens of instruments in each watershed without ever needing to change the batteries? You could afford the electrical power to sample in five minute intervals rather than hourly intervals. High def. What if you had a dependable high-speed internet connection to each instrument in each of your wilderness watersheds? You wouldn’t need to watch the TV show two onths after the fact when you get home from holidays. Real-time, live feed, watershed data running continuously and indefinitely available to you from any computer in the world. All powered off the grid by solar and micro-hydro power and connected via satellite internet. This is exactly what Hakai Energy Solutions has done, based out of a makeshift shop in a Cumberland storage locker.