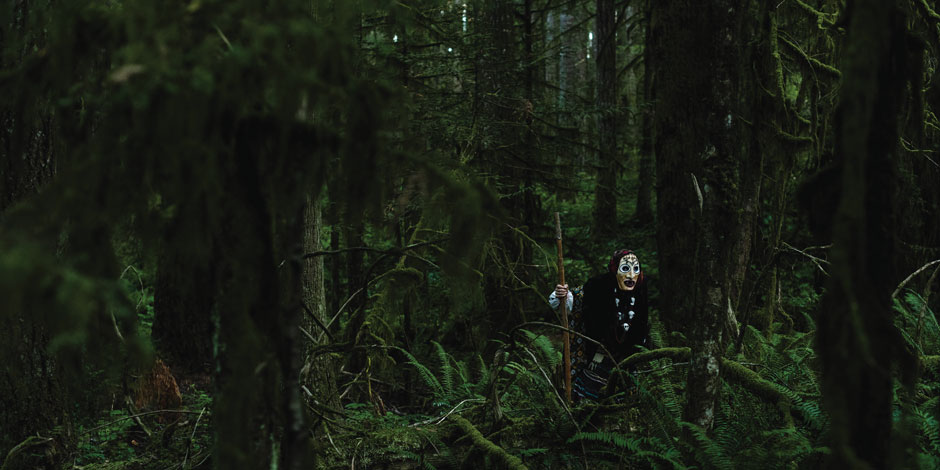 WITCHES OF THE WOODS

Folklore tells of female forms that dwell in the forest, personifying the power of this dark, natural world to frighten and mystify.

Fall gives way to a darkness, where fairytales operate best. As the days grow shorter and the sun slips behind the horizon earlier and earlier, we journey past the fall equinox and head down the shadow path toward Halloween.

This is the time of year when many cultures believe the veils are thinnest between the world of people and the world of spirits. It’s a time when myths and legends loom large in the imagination. The mysteries of the forest deepen, and so do the risks associated with getting lost. Nights can be long and cold in the woods.

Stories of the forest as a place of magic and danger are central to folklore wherever the natural state of land is forest. From right here on Vancouver Island to Germany, Ireland, and Russia, the forest was seen as a place beyond the normal path of travel, off the established road or trail, where strange things might occur, and even stranger creatures might live.

Children across cultures and through the ages have been warned, “Beware of the woods! It’s the home of monsters, fairies, and witches!” These stories instill just enough fear to ensure caution, and just enough mystery to spark curiosity.

Each witch of the woods has its own twist. In the Kwakwaka’wakw culture, the witch is Dzunukwa, the Wild Woman of the Woods, a dreaded cannibal who feasts on children and lives in the mountains and deep forests. She is a giantess—twice human size, covered in black fur with long, pendulous breasts. She serves as a warning to children not to run off alone in the woods, and as a bogeywoman—“Behave yourself or Dzunukwa will get you!”—a threat to make children behave, as her favourite food is disobedient, rebellious children.

Hansel and Gretel is one of the better known “witches of the woods” tales. This time the witch seduces lost and hungry children with her candy house. She fattens Hansel for eating, and grooms Gretel for slavery. Lessons for children are embedded here, too. Hansel’s greed upon seeing the candy house results in their capture by the cannibal witch. Gretel’s cleverness helps them escape her clutches.

In Ireland we find the Cailleach Béara in the forest and in rocky deforested landscapes that cover much of Ireland’s West Region. ‘Cailleach’ is the Gaelic word for a “hag” or “old crone.” She is one of the oldest and most powerful of mythical beings associated with Ireland. She is the bringer of winter, and her ability to control the weather is met with both fear and reverence. She is associated with deer, and failure to bless the kill after hunting can lead to her icy wrath.

Perhaps one of the most potent witches of the woods is Baba Yaga, a supernatural cannibal crone who lives deep in the Russian forest, in a spinning house perched on chicken feet and surrounded by pine trees and glowing skulls. She flies through the air in an iron cauldron that she steers with a broom, creating tempests in her wake.

But what if the witches of the woods are misunderstood? Could the witch also be the wise woman of the woods, forced into hiding? Perhaps she is the herbalist, the midwife, the grandmother, or the healer, whose story has been re-written?

An elder once told me that the Wild Woman of the Woods could also be a teacher who took children during a time of famine and taught them to survive in the forest. Perhaps Hansel and Gretel’s witch with her candy house is a herbalist. The Cailleach Béara plays an important role in the transition of the seasons, a cycle critical to life itself.

My daughter has a book about Baba Yaga that tells the story of a lonely and misunderstood old forest dweller who longs for grandchildren of her own, and who disguises herself as a Baba to help widowed mothers. In other versions of the story she aids a beautiful young woman named Vasilisa, who has been cast aside by an evil stepmother, much like Hansel and Gretel.

In fact, folklorists have noted that many of the “witches of the woods” tales involve motherless girls. During times when maternal mortality rates were very high, fairytales served as a place for mothers to leave important lessons for their daughters.

Today, these stories can teach us about duality and the light and dark aspects of ourselves and others. They provide an opportunity to face fears and to learn about the many faces of women, wisdom, and power. A nighttime walk through the forest wakens the senses, and shadows challenge our imagination. But as we wander in the darkest woods, we also cultivate a connection to place, unravelling, untangling, and revealing themes that span history and cultures.