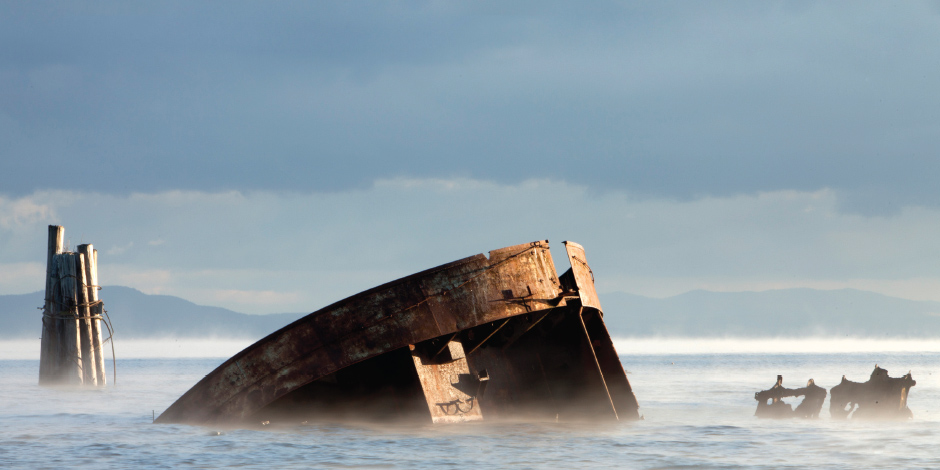 For the past 90 years Royston’s rusty monuments to Vancouver Island’s nautical history rests on the Comox Harbour seabed. Welcome to the Royston Ship Wrecks.

On most days, taking a walk along the rocky shores of Royston makes a southeasterly wind apparent. With the town of Comox as a backdrop, the rusty ship hulls rise out of the water like the throats of whales. At least 14 ships were gutted, drilled into and sunk here between 1936 and 1960 to reinforce a breakwater to protect boom-logging operations from winds running up the Straight of Georgia. The wrecks survive as a haphazardly curated museum of west coast industrial-era history.

The Royston Ship Wrecks encapsulate an impressive array of relics, including four Royal Canadian Navy Warships, three Cape Horn windjammers, and the Melanope, an iron ship that on its own serves as a fascinating record of a bygone era. Launched in England in 1876, she was throughout her lifetime an Australian emigrant ship, a cargo carrier and a barge. The ship’s exploits include running ashore, being partially dismasted, and enduring near mutiny while traversing such far off locations as Burma, Capetown, and South America’s Cape Horn. It sustained heavy damage during its final voyage from Mexico to Washington in 1906.

Many of the ships are visible from land, though the area is best explored up close. The wreckage is popular to kayakers at low tide and to divers keen to witness the details submerged. The makeshift reef is a registered archeological site, and each ship has been extensively documented by researchers.

A nod to the resourcefulness of humans and animals alike, the wrecks have become protected habitat for coastal sea and wildlife. Yet these ships, made to traverse thousands of miles in extreme conditions, are slowly rusting and decaying, ultimately at the mercy of the ocean and elements they were built—well over a century ago—to conquer.