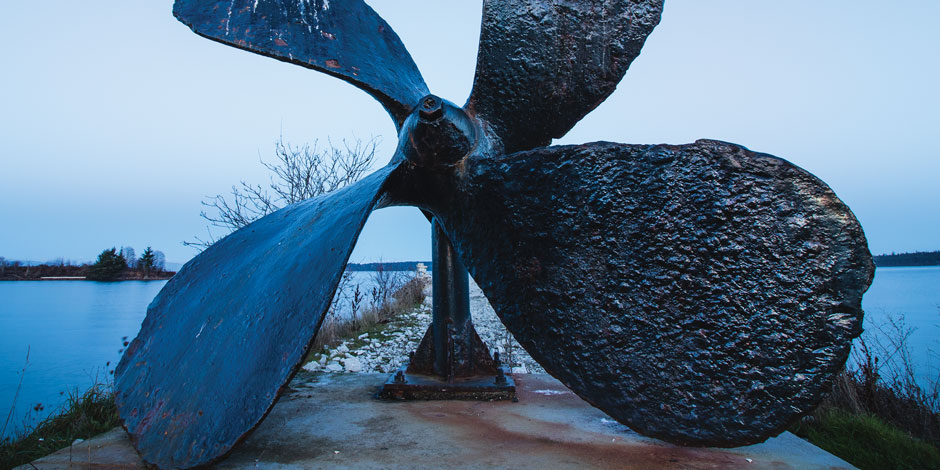 A local writer imagines the letter his daughter will write him about her return to Union Bay 20 years from now.

You are not going to believe who I had a drink with yesterday. Or where we had that drink. Remember Kyle, who lived up the street from us in Royston—I took ski lessons with him? I haven’t seen him since my second year of university, just before you moved out of the Comox Valley. Well here it is, what, 15 years later, and I run into him at the Highwayman Saloon in Union Bay! Guess what he does for work now?

But first, Union Bay. You wouldn’t recognize it. The Highwayman is in the same building, which I think you told me dates back to the 1920s or something crazy like that, but it’s been totally renovated. It’s all glass on the ocean side and you can sit upstairs where the weird manikins used to be.

They have this great timeline of photos showing the view from the second floor over the years. The first ones are black and whites from the mining days, showing trains from Cumberland dumping coal onto barges.

The next few photos show it after all the industry had packed up, and then from various stages as the plants took over—including from around the time we would go there to walk the dog.

And then there were a couple of pictures of construction. One showed the dredging of the bay for the e-marina. The pub overlooks it. It’s now full of beautiful sailboats and a community of houseboats. (Solar panels and wind turbines to power it all, of course.) Another showed the hotel mid-construction.

It’s done now and it’s where I’m staying, in this sweeping tiered building that’s supposed to look like a clam shell. It’s nearly self-sufficient, creating its own power from solar panels on the roof and collecting rain water.

I’m here for a shellfish conference, presenting my research on how Pacific oysters are adapting to climate change. And then I’m going to be a guest lecturer for a class at the Union Bay University. They’ve got a really innovative aquaculture program and I hear their forestry program is doing all kinds of interesting work developing new lumber products. I noticed a bunch of small, forestry-related businesses on the way into Union Bay

You’ll be glad to hear Baynes Sound is still a major shellfish-producing region. One speaker at the conference talked about how the farmers almost went out of business because of water-quality issues, but then the Regional District and province stepped up and rehabilitated all the old log sorts and other industrial sites, hooked up all the homes from Royston to Union Bay to the Comox Valley sewer system, and planted all kinds of aquatic vegetation (which also helps protect the shoreline from rising sea levels). Apparently the water quality is as good as remote places on the Central Coast now.

When I looked out of my hotel window the night I arrived, I noticed all these people outside. The hotel fronts onto a courtyard kind of area and then there’s the beach. (It’s specially designed to resist erosion from the higher sea levels.) It reminds me of coastal towns in Portugal or Spain where the waterfront is the communal meeting place. It was so inviting I couldn’t resist. I sat in a restaurant patio and just watched the people. Little groups hanging around, talking. Kids kicking a soccer ball on the beach. Some teenagers playing volleyball. A busker strumming on a guitar. You would have loved the food trucks—the food looked delicious. It was so lively and fun, I ended up sitting there until it was dark.

The next morning I went for a walk. There are paths going everywhere, so you never have to walk or ride on the road. From the hotel, one path heads north, weaving past a few condos and townhouses—there’s even a co-op housing complex and a retirement home—and around the fancy houses along the ocean. There were lots of people out walking. Eventually, the trail crossed the old highway and came back through a greenway on the other side, passing the solar farm that supplies most of the power to the community during the summer.

I chatted with a couple of mountain bikers for you. They were telling me about an epic trail that now does a big loop from Union Bay, connects to the Cumberland trails, then goes down to Royston and back to Union Bay. But they said the best trails are up around Langley Lake, which is just up the hill from the old part of Union Bay. It’s one of the main water sources in the area. The Regional District bought all the land in the watershed to protect water quality and let the hiking and biking clubs build a trail network starting around the lake and extending out from there.

By now you’re probably wondering about Kyle. Well, after meeting the mountain bikers I walked into the old part of town. It’s full of shops and businesses now. There’s a grocery store and pharmacy, doctor and dentist, butcher and baker—but no candlestick maker. (At least not one that I saw.) The old jail building is a brew pub, and the post office is still the post office, but more of a drone port, obviously. A sign outside says it’s the oldest post office still in operation in Canada.

That’s where I ran into Kyle. I recognized him immediately. He lives in Union Bay and was walking to his office in the commercial building near the hotel. But he’s also the town’s mayor! We made plans to meet for dinner at the Highwayman.

He’s busy developing some kind of AI technology that flew way over my head. He says there are a bunch of small businesses in Union Bay. He got involved in the water planning process—they’ve always been short of water, so Union Bay is now one of the most water-efficient towns in BC, he told me—and that led to politics.

Apparently, as the Union Bay Estates development grew, the overlapping jurisdictions running all the different services got too complicated, so it became its own municipality. He was on council for two terms before being elected mayor. He represents 8,000 people. I Wikipedia’ed it: there were only 1,200 people in Union Bay in 2020.

The amazing thing is that you’d never guess that many people live here. Everyone walks or rides everywhere, so there’s not a lot of traffic. Most people work at home or in Union Bay and you can get just about everything in town or with a drone delivery, so the highway is quiet. And there’s no sprawl.

I rented a kayak yesterday evening and paddled over to Tree Island, which is still a slice of white-sand paradise. After the sunset I raced the dark back. The hotel and marina were obvious, but from the water all the 3,000 homes were just little bits of light here and there. When they developed the estates, instead of mowing down the trees, they preserved them. So now, Union Bay mostly looks like forest.

You should come here for a weekend. I think you’d really like it. There’s this nice feeling of modern with a nod to heritage. I was just reading how back in the coal-mining days they called Union Bay “The Friendly Port” because Chinese, Japanese, Europeans and First Nations all worked here side by side. It still feels that way.

Off to people-watch on the beach. Write me back!

P.S. I hope the drone found you okay this time. I know how mad Mom was when my last letter delivery destroyed her flower bed.