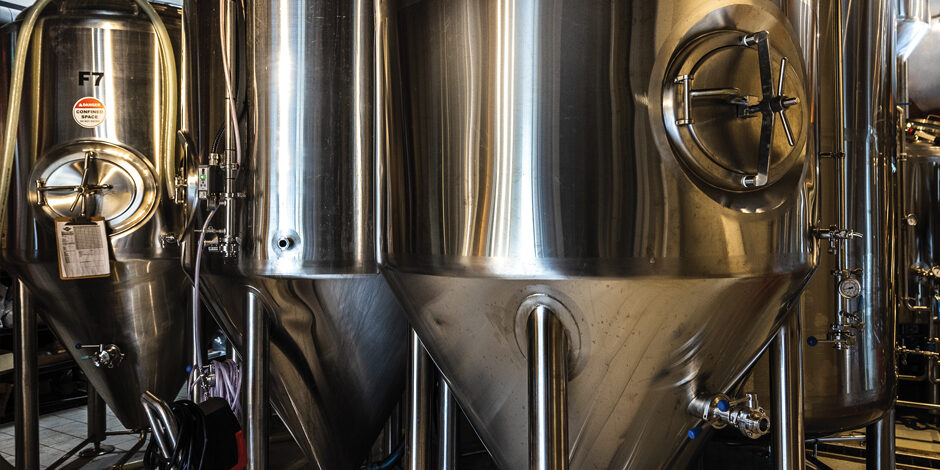 Not even a pandemic has stopped our growing love for local craft beer.

When I wrote The New Brewmox Valley for the inaugural issue of this magazine in 2014, I told a hopeful and optimistic story of three very different new and local breweries slated to open in the late months of 2014. The players: Cumberland Brewing Company (CBC), Gladstone Brewing, and Forbidden Brewing. I tagged them as the veterans, the frontrunners, and the underdogs.

Well, (*pats own back*) I hit the nail on the head. Seven years later, things have unfolded just as my article cautiously predicted.

CBC has thrived. They’ve got an understanding of—and unwavering devotion to—customer service and community involvement, and they chose a sustainable approach, forgoing the typical growth model that includes packaging and distributing. If you want CBC beer, you must get it in Cumberland, which has helped drive the development of the Village into a popular tourist destination.

Gladstone came out of the gates like a greyhound, boasting a lineup of great beers and a strong food game (courtesy of then-partner Pizzeria Guerrilla), which helped cement the corner of 4th Street and Cliffe Avenue as Courtenay’s unofficial cultural epicentre. They have continually grown by increasing their brewing volume, adding a canning line, and working hard to make a name for themselves throughout Vancouver Island.

Forbidden Brewing, the nano underdog, came late to the game (opening almost a year after their predecessors) and, after a number of trying years, went out of business. Economies of scale predict that a brewery cannot be successful if the brewing capacity is too small. Overhead costs like rent, energy, staffing, and so on are similar to those of a larger brewery, but the amount of beer you can make is too small to make up for these expenses. This hard truth, as well as a difficult location and a contentious relationship with their landlord, eventually led to Forbidden’s demise.

So. To paraphrase Max: three breweries entered, one brewery left. But today, the Comox Valley boasts five successful craft breweries. What changed? What happened? How have these businesses survived the ever-changing and unpredictable barrage of restrictions, closures, and inconveniences due to COVID-19? We’ll get to that. First, I’ll introduce the newest wave of Comox Valley breweries.


In Comox, Land & Sea Brewing opened in December 2018 after founders Jason and Hanna Walker overcame many challenges, including lengthy construction delays and parking concerns. After they finally opened, a boisterous tasting-room energy required major acoustic adjustments. Despite all this, they still managed to be named “Best Brewery Experience of 2019” by the BC Ale Trail.

Land & Sea’s overall vibe is modern and sophisticated, benefitting from lush plant life and an unmistakable feminine energy that so many breweries seem to lack. Loyal, friendly staff deliver efficient table service, adding to the comfortable atmosphere of the tasting room and patio.

The Walkers hit the nail on the head by hiring head brewer Tessa Gabiniewicz, who has yet to disappoint me with one of her beers. Her creations are approachable and delicate, yet distinct, flavourful and creative, often making use of locally foraged ingredients.

This place is the complete package. Final note: no visit to Land & Sea is complete without a plate of street corn nachos.


Full disclosure: I worked closely with Kent and Jo-Anne Landolt to open and operate Ace Brewing Company in the summer. So if I sound a little biased, I am. I love what the Landolts have done here.

Ace Brewing, too, experienced difficulties getting started. After months of (you guessed it) delays in licensing and other hurdles, paperwork was approved, beers were in the tanks, and Ace was finally almost ready to open. But suddenly they found themselves without a head brewer. A consulting brewer helped them to open while they searched for the perfect long-term lead brewer, which they finally found in Dan Lake. Anyway, it’s been a journey, to say the least.


When New Tradition arrived on the scene in autumn of 2019, owners/partners Patti Savard and Tammy Blair seemed quite secretive in their approach to opening. None of us Valley beer nerds knew anything about them, other than that they were opening a brewery in a mall. Turns out they were just very busy, opening with a fraction of the budget normally seen in this industry.

I was highly skeptical that a brewery and tasting room could find success in the Comox Mall. But New Tradition is part of a wave of fresh businesses sprouting up in and around the mall, including the Valley’s first legal cannabis dispensary, some trendy lifestyle stores, and fun, family-friendly food outlets.

New Tradition doesn’t give off a food-court vibe. At all. Instead, it’s rustic and cozy inside, with decorative earthen walls and handmade furniture. Outside, ample fresh air and the dog-friendly patio provide a great venue for taking it all in. Brewer Patti’s original lineup of ales is still intact, and has evolved nicely in refinement, character, and overall drinkability. But the main draw of this quaint little brewery is, and always will be, the honest and proud yet humble human beings who take care of this business.

The craft-beer party was just getting into full swing when Covid walked through the door, making it impossible for anyone to visit local breweries. That was tough; we’ve become craft-beer snobs in the Valley.

Our breweries, unable to open tasting rooms, were in a precarious position. Some, like Gladstone and Ace Brewing, were already canning beer for sale in liquor stores, so they were able to package and sell product that would have otherwise been poured down the drain.

Land & Sea and New Tradition, who were already on the cusp of packaging and wholesaling to liquor stores, quickly made that shift. On the other hand, Darren Adam will tell you that Cumberland Brewing Company survived this time by avoiding all the associated expenses like packaging, shipping, extra marketing, and so on…. And he might have a good point.

The fact is, all our local breweries are surviving through the pandemic, and it’s because you’re buying their beer. I spoke with Cari Hebert at Liquor Plus in Courtenay, who proudly champions local breweries and their products, and she marvels that people came out in droves during lockdown: “they wanted Ace, they wanted Gladstone,” she says. People wanted local beer.

Why did this happen?

Well, since 2014, Comox Valley beer drinkers have been growing a thirst that makes plenty of room for five breweries. But we’ve also grown a pride in our community.

And since Covid, we’ve stopped taking our craft breweries for granted. Those beer runs we did during lockdown were, at least in part, a way to support local businesses we suspected were struggling—a way to strengthen our communities.

Maybe it took a pandemic for us to figure this out, but we are spoiled for beer around here. So go enjoy a beer at a brewery you haven’t visited in a while, pat yourself on the back for doing your part in keeping the local craft industry afloat during tough times, and raise a glass to the new Brewmox Valley.